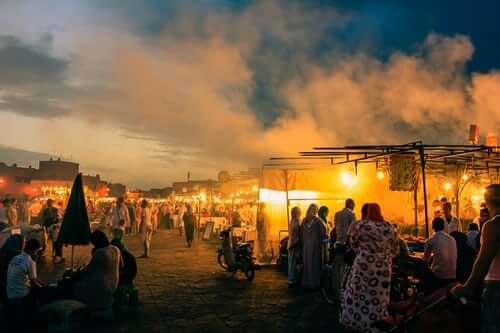 Imperial Moroccan city and capital of the South. Marrakech is a powerful pole of attraction! For the traveler arriving from the North, the appearance of the famous palm grove in the middle of the burning plain of Haouz is an astonishing spectacle. In winter, when the snows of the High Atlas sparkle
in the distance, the surprise is even greater!

Besides the intense picturesque street, Marrakech offers people the attraction of its beautiful monuments and the charm of its immense gardens. From November to May, it provides the visitor with a mild and dry
climate, a blue sky, and a limpid atmosphere. Thanks to its proximity to the High Atlas, it is an excellent base for motorists who want to go for a trip in the mountains and for skiers attracted by the snowfields of Oukaimeden and Djebel Toubkal.

What To Do In Marrakech:

I must say that the most eager tourist will have to devote at least two days to visit Marrakech. Still, he will accomplish a tour that will leave him many regrets! To take away from the big city of the South fair impressions and lasting memories, two days and a half or better yet three days are necessary.

On the first day, In the morning, a tour in the southern districts of the
medina will allow you to admire some of the most beautiful monuments of the indigenous city. In the afternoon and after eating a warm Tanjia “made in Marrakech”, the walking tour of the center of the medina will take you through the souks and will end with a long and fun stroll on the Djemaa el Fna square, the great “crazy place” of Marrakech. On the second day, A drive around the ramparts and in the gardens of Aguedal and Menara will occupy the morning. In the afternoon, the tourists who will have the afternoon at their disposal will drive around the palm grove or will get to know the medina better.

A Bit Of Marrakech History:

Towards the middle of the 11th century, Saharan warriors, with their faces veiled by the “Lytham” as the Tuaregs, crossed the Atlas and descended into the Haouz. No sooner had they reached the plain than their leader, Abou Beker, who was forced to return to Mauritania to suppress a revolt of his subjects. When he returned two years later, his lieutenant Youssef ben Tachfin, to whom he had entrusted his wife and his army, refused to give him back both of them, showered him with gifts, and told him to renounce his desert.

Youssef ben Tachfin had set up camp in a place so feared by travelers that the Berbers had called it “M’rrakouch”, meaning “Walk fast”. Protected by the rocks of Guéliz, the site was well chosen but the water was lacking. To solve the problem, Youssef had wells dug and connected them by a network of underground pipes bringing water to the camp; this was the origin of the “Khettaras” which still bring life to the gardens of Marrakech.

In true Saharan, he planted the tree of his country, the palm tree, which explains the unusual presence in the North of the Atlas Mountains of a large oasis. Very quickly, the camp became an important market, then a large city from where Youssef left to conquer the Moghreb (Morocco). Forty years after its foundation, Marrakech was the capital of an empire that
stretched from the Ebro to Senegal and from Algiers to the Atlantic Ocean.

A Dynasty Of Builders:

The Almoravid dynasty founded by Youssef ben Tachfin did not keep power for long. From the beginning of the 12th century, missionaries of strict observance who claimed to be the envoys of Allah preached against the slackening of religion and morals, rallying the Berber population to their cause, they undermined the authority of the sultans and conquered the North and East of the country. One of them, Abd el Moumene, took Marrakesh in 1147, seized power, and became the head of the Almohad dynasty.

The first care of the new sultan is to purify the city by throwing down the monuments built by his predecessors. He had the Almoravids’ palace razed to the ground and began to erect a mosque on its site, the Koutoubia, whose marvelous minaret still dominates the city and the palm grove today. His son Abu Yacoub. continues his work and begins the construction of a huge kasbah. In love with Spain where he spent part of his youth, he built a large mosque in Seville; his minaret, the Giralda, a replica of the Koutoubia, is still the pride of the city.

The third Almohad sovereign, Abu Youssef Yacoub is a contemporary of the French king Philippe-Auguste. Called “Yacoub El Mansour” (the Victorious). After defeating the rebellious Castilians, he completed the work of his father and grandfathers; in Marrakech, he completed the Koutoubia and Kasba and endowed the city with palaces and mosques; in Seville he completed Giralda.

Master of North Africa up to Tripolitania and Spain up to Madrid, he wants, in imitation of the Idrissides who created Fes and the Almoravids, founder of Marrakech, to give to his empire a capital that is purely Almohad. Having
chosen Rabat, he began to build a colossal mosque, whose minaret, the current Hassan Tower rivals in majesty with the Koutoubia and Giralda.

All Of The Sultans Love The City:

At the end of the 19th century, Marrakech still retains its role as the metropolis of the South. The great Sultan Moulay Hassan came to settle there and gives the city a new brightness. Under his reign and that of his son, Abdel Aziz, beautiful palaces were built; Dar el Beida, Dar Si Said, and especially the magnificent vizierial residence, the Bahia Palace.

This vast square whose name would mean “meeting of the dead” was once the place of Strike of Marrakech; it is there that the sultans tortured their victims and exposed to the public the severed heads of criminals and rebels.
Today, Djemaa el Fna is the heart of the red city. It is the artistic square, a permanent circus! At the end of each afternoon, the show begins; acrobats, storytellers, musicians, snake charmers, Chleuh dancers take over the square. Circles are formed, the crowd runs, and Djemaa el Fna really deserves the nickname given to it by the Tharaud: the crazy square.

It is at this time of the day that you should linger there and it is at sunset that you should go up on the terrace of the famous Café de France to have an incomparable view of the square and its human anthill, of the Koutoubia located against the light and, on a clear day, of the snowy summits of the High Atlas. Ah! don’t forget to order the local mint tea! The real Moroccan tea that I recommend for these incomparable moments

Djemaa el Fna square, in fact, is what made Marrakech one of the world’s best food cities. As soon as you get to the famous square, you realize smoke rising from everywhere! You will be surprised by the food options offered; sandwiches, egg-tomato recipes, Harira soups, barbecued meats, couscous, different tagines, and Marrakchi Tanjia of course

The Koutoubia mosque, or “mosque of booksellers” (so-called because book merchants used to store around it) was built in the 12th century, by the Almohad sultans as mentioned before. The minaret, 70 m. high (230 feet) like the towers of Notre-Dame in Paris, is the masterpiece of Hispano-Moorish art. From far away, it reveals its harmonious silhouette, both robust and slender. Its pink and red walls bear a delicate sculpted
and painted decoration that varies with each face. The top of the tower is surrounded by a blue and white earthenware covering. The golden balls on top of the lantern have their legend; it is said that they are made of gold and that they were melted with the jewels of a sultana, the wife of Yakoub el Mansour.

The splendid mausoleums where the members of the Saadian dynasty rest were built at the end of the 16th century by Ahmed the “Golden”. A century later, Moulay Ismail, not daring to raze them as he had done with the palace of El Bedi, confined them in a high enclosure where no one saw them anymore. They were found only in 1917. The access corridor was pierced through the thickness of the enclosure to allow non-Muslims to visit them, without passing through the El Mansour Mosque.

A large basin, surrounded by a paved walkway, reflects an elegant pavilion framed by cypresses. It was the meeting place, the Deer Park of the sultans, and it is said that one of them had the cruel habit of throwing last night’s chosen one into the basin in the morning. Historians said that the olivette of the Menara was reserved for the sultans.
The terrace of the pavilion guarantees a very extensive view of the Atlas Mountains.

Built at the end of the 19th century by Ba Ahmed, the vizier of Moulay Hassan and Abd el Aziz, the Bahia Palace (the “pretty”) is, among the buildings that must be visited. Today it is considered to be one of the
most attractive touristic points in Morocco. The palace is an amazing masterpiece of art that reflects the Andalusian character of Moroccan architecture.

Sidi Bel Abbès, whose zaouïa contains the tomb, is a holy healer and the most venerated patron saint of Marrakech. The surroundings of the sanctuary constitute a true court of miracles. Some people still visit
the place to seek healing or, failing that, almsgiving which will be taken from the offerings of the pilgrims.

Raised in the middle of the 16th century by the mother of Ahmed the “Golden”, the pious Lalla Messaouda, this mosque is dominated by an elegant minaret.

Monumental fountain, located near the mosque of the same name.

This sanctuary houses the tomb of one of the 7 patrons of Marrakech. Next to the zaouia whose main door deserves a glance, a pretty fountain decorated with earthenware tiles is surmounted by a carved
canopy.

These popular markets are often a highlight for tourists. Marrakech has been always a strategic location at the heart of Morocco and its souks guarantee the historical element. Artisans and craftsmen sell
different authentic products…the reason to take a trip and look for a souvenir!