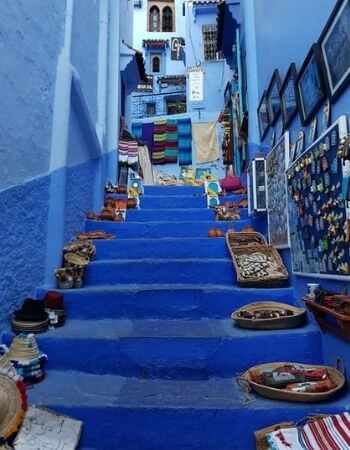 One of the most beautiful bays in the Mediterranean, Tangier, the Moroccan, is the gateway between the European and African continents; a crossroads between north and south, the Atlantic Ocean, and the Mediterranean Sea. The city is less than 15 km from the European coast and watches over the entrance to the Strait of Gibraltar, one of the world’s major maritime crossroads.

The city of foreigners, as some people call it, keeps many traces of these periods of colonization. Its successive occupations and its exceptional geographical position has made it a place where several civilizations have met to create a unique cultural richness. Today, it presents everything a tourist can imagine; a mythical city with a huge historical background and a beautiful landscape with a temperate climate (average: 13° in winter and 23° in summer).

What To See In Tangier:

In Tangier, you must stay at least two long days to visit the port, the incomparable cornice, the medina (ancient city), the historical kasbah (ancient fortress) with its high walls, the district of Jebel El Kebir (big mountain) with its modernist style and art deco buildings, and many other tourist sites that you will discover and love such as Cape Spartel and the Caves of Hercules.

A visit to the ancient city, precisely, is a must for all tourists. It only takes about 3 hours and allows you to see the most lively and picturesque corners of the old Tangier. The medina’s large Socco, with its scents and smells, will stimulate your senses and allow you to live unforgettable moments!

A good glass of mint tea in the square of the small Socco, while discovering this exceptional place, is another experience not to be missed!

What To Eat In Tangier:

Like any other touristic city in Morocco, Tangier provides different traditional  Moroccan dishes. However, there are some special dishes that are linked to the city and that an authentic food lover can enjoy just there!

When you visit this food city, you will discover its real and authentic cuisine in which fish is the central theme. Squid (stuffed), sea bream (with olives), Whiting (fried with eggs or liquid chermoula), Shad, and fish Tagines of all kinds, are a real delight and offer a unique culinary experience. Besides fish dishes, you will enjoy other specialties like Tangier Baysara (split pea soup), Northern Harcha (a cake of corn semolina that can be eaten sweet or salty), Pigeon Pastilla, and Nougat (honey with nuts especially almonds beaten into egg whites and sun-dried).

According to legend, Tangier was founded by Anteus, son of Neptune. Occupied by these navigating peoples that were the Phoenicians and the Carthaginians, then fell into the hands of the Romans, it became, under the name of “Tingis”, the capital of Tingitane Mauritania and knew 400 years of peace and prosperity.

In the 5th century, the Vandals seized it, then the Visigoths (the splendid monuments erected by the Romans were destroyed). During the following centuries, Muslims from Spain and Muslims from Africa fought over the city that was finally preserved by the Moroccan sultans. In 1471, it was taken by the Portuguese and 100 years later by the Spanish. In 1661, the infanta Catherine of Braganza offered it to her husband Charles II of England. 20 years later, under the reign of the great sultan Moulay Ismail, the Moroccans took it back from the English.

Tangier Under A Regime Of Neutrality:

The statute of Tangier is the result of the conventions signed from 1923 to 1928 by France, England, Spain, Italy and to which Belgium, Holland, Portugal, and Sweden adhered. It regulates the extremely complex organization of the international zone of Tangier, placed under a permanent regime of neutrality.

From June 1940 to October 1945, the area of international administration was militarily occupied by Spain and attached to the Spanish zone. Following a conference held in Paris in August 1945, the old status was provisionally reinstated, although some changes were made to the pre-war regime, and the United States and the Soviet Union were invited to participate in the provisional regime. In 1956, Tangier joined the Moroccan territory again, according to an agreement signed by the occupying powers (1952).

Tangier continued, then, to develop as an important crossing point, while keeping its multi-cultural identity and its attractive aspect. Its population, which is a mixture of races, has found the perfect conditions to build their city. Today, Tangier is the second-largest city in Morocco. It is, also, one of the most visited cities around the world.

Walking in the medina will allow you to discover behind-the-scenes of this old city; a city rich in history and culture. The most important touristic points in the Medina are:

The Kasbah is the starting point of Tangier; it was there, where the inhabitants of Tangier lived while protecting themselves its giant walls. Located at the top of the mountain, the Kasbah of Tangier has preserved its original and unique architecture; an attractive location that will please you with its square, known as Kasbah square, its ancient palaces, and its traditional alleys.

Located inside the kasbah and, Dar El M’khzen is the most important castles of the kasbah. It was the residential palace for many Moroccan sultans. The magnificence of this palace which has been converted into a museum beside the spectacular views guaranteed from there makes the place one of the best attractions in Tangier.

Located in the heart of the Medina, the small Socco was the center of business and the meeting place of the idle in the past. Today, the square is a place full of life with houses typically Tangiers; blue and white, small cafes; where to enjoy a refreshing authentic mint tea, and special shops; a suitable area to buy handicrafts.

The big Socco is a beautiful entrance to the medina, a large, busy square with a fountain in the center; a romantic location that tourists admire.

The Great Mosque, located in the medina and built by Moulay Ismail in the early 19th century, is the symbolic mosque of Tangier. One of the most important monuments of Tangier with a very special design.

In the 17th century, it was the hideout of the Moorish brigands who harassed the Europeans of Tangier. Afterward, the place was the aristocratic suburb of the international city. Today, this chic “district” of Tangier, which hugs the slopes of the surrounding hills, is an amazing touristic place.

Natural limestone caves open to the sea. A famous touristic place since the beginning of the 20th century. The caves present beautiful vaults dug, torn in a picturesque way by the sea. Inside them, the main corridor leads to several rooms. The place is so beautiful and mysterious.

Cape Spartel marks the extreme northwestern tip of the African continent. Its steep slopes disappear under a thick scrubland (cistus and mastic grass) which is covered with flowers in March. A lighthouse, with a power of 200,000 candles and a range of 35 miles, was raised there. From the top, a beautiful panorama of the Atlantic, the Strait of Gibraltar, and the Spanish coast.

Very beautiful beaches are located in the great region of Tangier. Beaches that offer a unique experience like Malabata beach; the most famous.