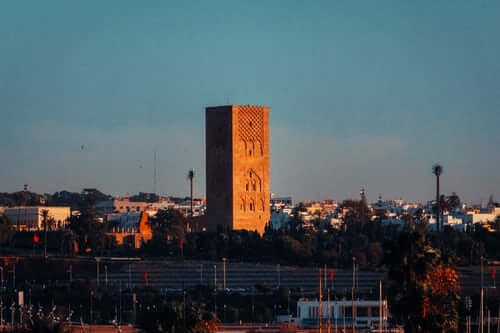 Founded during the Almohad era in 1150, Rabat is the capital of Morocco. It is a beautiful city built along the shores of the Bou Regreg River and the Atlantic Ocean. This coastal city provides a unique historical heritage, and a pleasant climate all year round.

What To Do In Rabat:

The visit to Rabat requires about two days. On the first day, a walk in the medina and at the Oudayas Kasbah will introduce you to the most picturesque aspects of the city. In the afternoon, a drive through the new city will reveal the harmony of old and new buildings in Rabat. On the second day, a visit to the old medina “Mellah”, the Merinid necropolis of Chellah and the ascent to the Hassan tower, an incomparable belvedere on the city of the two-rives. If you want, you can devote another day to the visit
of Salé, sister city, and rival of Rabat.

What To Eat In Rabat:

Rabat is a famous food city and the cuisine R’batie ranked among the best in Morocco. You will discover the secrets and delights of Rabat’s unique tajines. It is also the place where you will digest the real Moroccan dessert Feqqas.

In 1930, at the gates of Rabat, under the ruins of the Muslim necropolis of Chella, the remains of a Roman city, Sala-Colonia, was discovered, which must have had a double role. Built at the edge of the Bou Regreg whose capricious meanders have been much rambling since that time, it constituted a river port that its distance from the sea and the obstacle of the “bar” put away from any surprise. Its location on the borders of the Roman possessions made it an important place for the defense of the empire.

Sala fell into the hands of the Berbers, but when its port became silted up, they abandoned it and founded a city on the other side of the river, which they called Salé. When the Moroccan sultans took Salé, they judged useful to create on the left bank of the Bou Regreg a strategic post, a bridgehead
which would enable them to hold in respect the heretic populations still unsubdued in the South of the river. They thus founded on the bank of Chellah, but closer to the sea, a “ribat” which was to give its name to the city. A ribat was a kind of fortified convent whose monks made war on the Infidels.

In the middle of the 12th century, Sultan Abd el Moumene used this ribat as a concentration camp for the troops fighting the Christians in Spain. To make it stronger, he had a powerful castle built on the rock overlooking the mouth of the river, which formed the nucleus of the Kasbah of the Oudayas.
His grandson, Yacoub el Mansour, decided to transform the camp of Bou Regreg into a vast and sumptuous city, called “Ribat el Fath”, the ribat of victory, in memory of the great victory of Alarcos won by his troops over the Castilians. He enlarged the castle of his ancestor, raised a long wall pierced with monumental doors, and undertook the construction of a colossal mosque whose minaret, the current Hassan Tower, was to exceed in majesty the Giralda of Seville and the Koutoubia of Marrakech, begun
by his father and grandfather and completed by him.

At the beginning of the 17th century, the king of Spain, Philippine the third, expelled the last Moors from his kingdom. These took the road to Algeria and Morocco. 2,000 of them, coming from Andalusia, disembarked at Salé, but their more Spanish than Muslim manner (the women came out with their faces uncovered) and a rather bad reputation (they were said to be looters and counterfeiters) alarmed the Sultans, who were not ready to make them pass the Bou Regreg and to confine them to the ruins of the
Kasbah of the Oudayas.

As soon as they were settled, these Andalusians overran the area assigned to them. Next to the kasbah, they built a city and surrounded it with a wall that still limits the medina today. Masons, carpenters, craftsmen, and shipbuilders gave back to Rabat a certain activity that developed rapidly the launch of a particularly lucrative industry, that of sea banditry.

It was out of revenge that the Andalusians first instituted the war of race against the Spanish merchant ships. Then they developed a taste for this dangerous but lucrative occupation and soon attacked indiscriminately, from the Canary Islands to the English coast, all merchant navies.

Having chosen Rabat as the administrative capital of Morocco, Lyautey wanted to make the French taste shine there. He first ordered that the new city and the medina would not mix. A wide boulevard was drawn which separated them. Then he organized a service of city plans, which, under his permanent supervision, took care of the distribution and the layout of the roads, the location of public buildings, and the “respect of the landscape”. The largest part of the town was made up of villas surrounded by gardens, which gave it great charm. The administrative services themselves were housed, not in these vast and dreary buildings called ministries, but in gracious residences, decorated with flowers.

Thanks to these wise dispositions, Rabat has entered, without hindering it and without harming its beauty, into the framework of the ancient Rabat; elegant city, calm, and restful. In fact, it is one of the most sought-after places of residence in Morocco.

Tower of Hassan is the colossal mosque that Yacoub el Mansour had built at the end of the 12th century, and which was never completed; only sections of columns remain. The great earthquake of 1755, which destroyed Lisbon and ravaged the Moroccan coast, caused part of the building to collapse. A great fire a few years later completed the destruction, and then men plundered the ruins for 150 years to remove building materials. The ruins of the mosque consisted of 21 naves and 21 bays supported by 360 columns, was to be one of the largest sanctuaries of Islam.

Today, the tower has become the symbol of the capital with a touristic
reputation that goes beyond the borders. At the esplanade of this famous tower, there is an architectural marvel, the mausoleum Mohamed V where the two kings Mohamed V and Hassan II, his son, rest.

Built-in the 17th century, this building was probably originally the palace of the kaid of the privateers, it was used as a flying school then was transformed into a madrassa. It now houses the interesting museum of Moroccan art. In the patio, of a very pure style, in the galleries and adjoining rooms, in the old student rooms, are exposed magnificent collections of artworks and indigenous objects; manuscripts (700 years old Korans), Berber and Arab jewels, weapons, pottery from Fez, carved chests, carpets from Rabat, embroideries from Salé, Rabat, Fez, and Meknes. The reconstitution of a Moroccan interior and a barber store complete the museum.

The Door Of The Oudayas:

It was built at the end of the 12th century. by Yacoub el Mansour. Its majestic proportions, the elegance of its arch, the richness without a profusion of its sculptures, and the beautiful red tint of its stone make it
one of the most remarkable works of Almohad art. From the terrace that covers the gate of the Oudayas, a superb panorama on the modern city of Rabat, the medina, the garden of the Oudayas, the Bou Regreg, the Hassan tower, Salé, and the Ocean.

Built-in the 12th century by Sultans Abd el Moumene and Yacoub el Mansour, it was in the 17th and 18th centuries a nest of pirates. Thanks to the very picturesque aspects of its old walls, its majestic gate,
its Madarsa, and the delightful garden that was laid out there, it has become today the place of predilection of the artists. Its charming Andalusian garden, in turn, offers another dimension of beauty.

An ancient Roman city later abandoned, Chelah became in the 13th and 14th centuries a fortified monastery and the necropolis of several Merinid sultans. It is one of these, Aboul Hassan, who made raise in 1339 around the tombs of his ancestors, the splendid enclosure which one sees today.

This is the heart of Chellah, the revered place where geniuses would watch over fabulous treasures. The place is of captivating charm. The ruins of the old monastery are overgrown with exuberant vegetation where countless storks nest. From there, you will see: the miraculous fountain of Moulay Yacoub, the mosque, and the funeral chapel of Aboul Hassan, nicknamed the “Black Sultan”.

Constructed by Yaacoub Al Mansour in 1197, this door whose name means “door of the winds” (whipped by the sea winds), offers between two massive and naked bastions a sculpted facade of great character. It is the most majestic and well preserved of all the historical gates of the city.

Forest Of The Mamora:

Originally, the forest of Mamora formed a huge expanse of cork oaks spread over 100 km deep, between the Atlantic coast and the valley of the Beth, on the one hand, the R’harb and the Bou Regreg on the other hand. In 1912, when the French arrived in Morocco, its surface area was only a third of what it had once been. The gradual disappearance of the forest was due to frequent fires, disorderly exploitation by the natives, and intensive grazing. The forestry service of the Protectorate, set up in 1913, took the necessary measures; distribution of the forest for fire-fighting, regulation of tree felling and charcoal making, and limiting the number of animals allowed to graze.

Today, the Mamora forest to the north-east of Rabat still accounts for almost half of Morocco’s cork oak forests. It covers 137,000 hectares in a single block. The cork oaks mixed with wild pear trees are beautiful trees that grow quickly thanks to the humidity of the Atlantic climate. Indeed, it is the first cork oak forest in the world. Mamora is an ideal ecological tourist point for exceptional hikes.
Don’t forget to visit the ecomuseum which will allow you to better understand the ecosystem!

For lovers of sun and beach relaxation tourism, Rabat offers coasts with a succession of rocky creeks and sandy beaches. the beaches of Sable D’or, Témara, and Skhirat in the south are the best. A sports port at the mouth of the river Bou Regreg is waiting for them; a magnificent complex that should be visited.