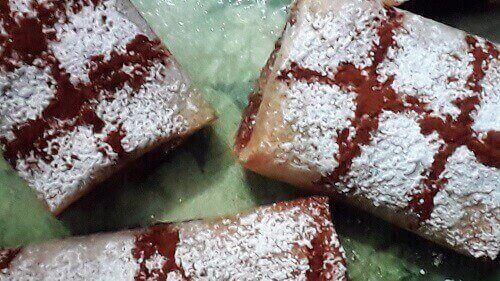 This post may contain some affiliate links. when you buy something through these links, I earn a small commission at no extra cost to you. This helps maintain my publishing activity. Thank you!

Sweet pie is woven from different histories, traditions, and cultures. In Morocco, people name it sweet Bastilla or Pastilla and make it basically with apples and almonds or walnuts. However, we can distinguish other varieties that mix apples with other ingredients such as apricot, mint …

In this article, I will share with you an original Moroccan sweet pie recipe, apple pastilla with walnut, that will please you a lot. But first, let me give some information about this melting and crispy dessert with overseas origins!

A Bit of History:

Pies first appeared about 9500 BC, in the neolithic age. These pies, invented by the ancient Egyptians, would have been filled with honey, as it is believed. Drawings found in the tomb of Ramses II in the Valley of the Kings, show, also, a sort of early pastry with fruits. However, many researchers think that it was the Greeks that invented the pie pastry in 1304 BC. They wrapped their meat in the past made just with flour and water to help seal in the savory juices of the meat. Later on, when the Romans conquered Greece, they carried on the galette tradition. And pie entered a new historical period.

The Romans, According to some historical documents, used different types of meat and fish like lampreys, mussels, and oysters in their puddings which resembled pies we know today. Roman pies were basically not sweet. However, In 160 BC, a Roman statesman called Marcus Porcius Cato, known as Cato the Elder wrote a treatise that included one of the most delicious baked goods of his time called ‘Plăcintă’. Placentas that looked like cheesecakes on our pastry base, were offered to the gods as a gift or even sacrifice. Historians think that the recipe was recorded for religious reason, considering the importance of gods, spirits, rituals, and sacrifices in Romans’ life. We should thank spirits to protect the recipe for us!!!!!

The Roman roads played a crucial role in the spread of the pie throughout Europe. By the 12th century, the famous recipe in England was mainly meat pie with a thick crust known as ‘coffin’. Yes, ‘coffin’! The horrible word which had not changed until the time of the American revolution when the term crust started to be used. The pie crust, made with oats, wheat, barley, and rye, was several inches thick to withstand the long-time baking. It was used to hold the filling as a container, and was not really meant to be eaten! To some extent, the old meat pie is baked nearly the same way we prepare casseroles with no pan today. Shepherd’s pie, made with meat and potatoes, was one of the famous pie recipes prepared by British women during this period. Historically, the term ‘pye’ meaning ‘meat or fish enclosed in pastry’, was included by medieval Latin in the 14th century, as noted by the Oxford English Dictionary.

In the 16th century, fruit pie appeared, and the first cherry pie was served to Queen Elizabeth I. The dish started to be made with new sweet fillings. In 1589, Robert Greene, the English author, wrote: “Thy breath is like the steeme of apple pies.” Sweet pies, but, also, strange pies were recorded during this period! New ‘animated pies’ appeared and became a trend for the wealthy! Pies that provided great entertainment by hiding living creatures like frogs, rabbits, turtles, and even small people inside them! In 1626, at an event for King Charles I, a tiny boy named Jeffrey Hudson was presented to the King and Queen Henrietta Maria, hidden in a large pie!

Pie Becomes a Staple in America:

In 1620, the pilgrims brought their pie recipes with them to America and started to adapt them with local ingredients. They made pies with wild berries, and as America moved west, they prepared them with vegetable fillings like sweet onions and tomatoes. The pie crust, however, still was not eaten, just like in Roman times. By the 1700s, pies were nearly served with every meal in America and were filled with various ingredients. The first president of the US, George Washington’s favorite pie had a sweetbread filling!

When first arrived, settlers found that crab apples were the only native apples in the new world. The tiny ‘poor’ apples were intended for cider, and not eating or making pies! This is necessarily why Jamestown colonists brought apple tree seeds and cuttings from Europe. And the fruit started to blossom!

Over a few decades later, settlers ‘improved’ their land and planted more trees among which were apple trees. Hundreds of apple varieties appeared and many of them were perfect for apple pies. In 1759 a colonial visitor wrote home that “Apple pie is used throughout the whole year, and when fresh apples are no longer to be had, dried ones are used”. Also, The 1796 America’s first cookbook titled ‘American Cookery‘, by Amelia Simmons included two recipes for Apple pie. Americans started to eat apple pie more than any other variety. In fact, the beloved classic dessert did not take a long time to become a part of the Americans’ culinary repertoire.

By the turn of the 20th century, apple pie has become so much a part of the culture in America. New York times published, in 1902, an article that considered it a food of the heroic “No pie-eating people can be permanently vanquished.” In 1912, a competition about apple pie stipulated that “the contestants must be fifteen years of age and under and that all raw materials which entered into the making of the pies were to be assembled in the presence of the judges and the audience.” Apple pie, also, became a symbol of power for politicians in the country! In 1935, the state of New York sent 75 apple pies to the Capitol, to prove their superiority, when a quarrel with Oregon over who produced the best apples, took place in the congress. During World war II, the saying of patriotism “As American as Apple pie” took off to reflect the true value of ‘the most traditional dessert in America’

After the war, the dish became more symbolic and more culture-bound. In 1951, Henrietta Nesbitt, Roosevelt’s White House head housekeeper, said in her Cookbook ‘Feeding the Roosevelt’s and Their Guests’ that “apple pie was the President’s preference among pies” and that it was “generally conceded to be the All-American favorite.”The quick development of the Modern food industry made pie-making simpler. The number of pie eaters became larger as instant puddings and pre-made crusts started to appear. In 1974, a commercial jingle described Americans’ culture as “Baseball, hot dogs, apple pie, and Chevrolet, they go together in the good ol’ USA.”

Now, the American beloved pie is hugged and celebrated with pride. chocolate and pumpkin pie are fan favorites, but apple pie remains a symbolic dish with more presence in Americans’ life. In a survey, 19% of Americans said that apple pie is their favorite kind of pie!

In 1492, the Moorish arrived in Morocco, after the fall of Al Andalous in Spain, and brought with them many local recipes among which was Bastilla. The word Bastilla or Pastilla, in fact, is linked to Spanish (pastel means cake) which reflects clearly the origins of the recipe. Through the years, Pastilla has been adapted to the rich Moroccan cuisine and becomes today one of the famous traditional dishes in the country.

How To Make Moroccan-Style Sweet Pie, Apple Pastilla With Walnut:

I hope this perfectly sweetened apple pie will please you a lot! Believe me, You can not imagine how good your kitchen will smell during the preparation!

How To Make Super Easy Homemade Baguettes Without Food Processor!